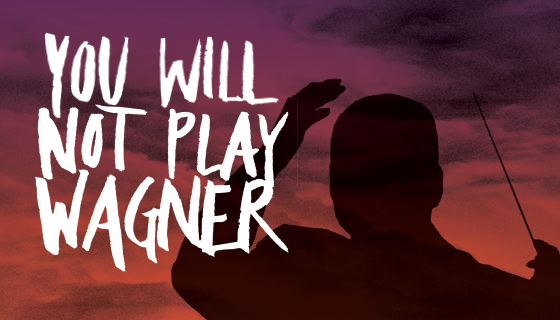 You Will Not Play Wagner

Ever since the Holocaust, performing works by the composer Richard Wagner has been taboo in Israel.

Wagner’s anti-semitism and the use of his music by the Nazis are well known. This unofficial ban has been challenged – unsuccessfully – by acclaimed Israeli conductors Zubin Meta and Daniel Barenboim, and opposition to Wagner’s music remains steadfast.

You Will Not Play Wagner is set in contemporary Tel Aviv, where Ya’akov, a young Israeli upstart, causes a storm by selecting to perform Wagner in the finals of an international competition for conductors. He comes into conflict with Esther, Holocaust survivor and competition patron who has her own tragic connection with Wagner’s music, and Morris, the competition organiser.

Their arguments push the competition to the brink and set Israeli society on edge. Should Ya’akov play Wagner? Should the politics of his music interfere with the quality of his art? To what extent do we honour the memory of the Holocaust, its survivors and their descendants, without stifling the next generation? And would a Jewish Israeli conducting Wagner be treachery or triumph?

Book now for the kosher pop up restaurant!

Parking
There is no onsite parking and only limited timed street parking near the theatre. Parking is available at 70 Riley Street, Darlinghurst, a short walk from the theatre. Wilson Parking now operate this car park. $8 parking is available week day evenings from 5pm and on weekends. No validation is required. See this link for further information and week day pricing.

Train
Museum Station is the closest train station and is a ten minute walk to Eternity Playhouse. Alternatively, Central Station is a five minute bus ride away. Visit www.sydneytrains.info for more information.

Bus
The 389 bus (which runs between Pyrmont and North Bondi via Town Hall) stops close to Eternity Playhouse on the corner of Bourke and Burton Streets. Numerous bus routes also stop on the corner of Oxford and Palmer Streets, a two minute walk from the venue. Visit www.sydneybuses.info for bus timetables.

S: You are a retired pharmacist. Pharmacist to playwright is not a common journey. Can you tell me a bit about what inspired you to become a writer and how did you get into playwriting?

VG: To be honest, I attribute the development of my imagination and the desire to create plots and dialogue to a childhood overdose on Enid Blyton! With her as my muse I wrote my first play at the age of 13 and went from there. I could never attack the descriptive challenge of a novel but love the creative process through dialogue, subtext, silence, lighting, mood and, of course plot in dramatic form.  Pharmacy provided bread for my table; writing provided the passion.

S: What inspired you to write You Will Not Play Wagner?

VG: I’m inspired by the dramatic possibilities inherent in debate and if the subject matter has a connection with Judaism and/or Israel, so much the better. I’ve been aware of this informal ban on the public performance of Wagner’s works in Israel for a long time but it took some years for the penny to drop that it presented a debate worthy of exploration.  My challenge was to present it in a form that would not be too academic nor ‘documentarish’ which would rob it of its dramatic potential. The underlying demand is it’s value as entertainment.

S: What makes these characters so interesting to you, even though their backgrounds are so different from your own? Where did the characters of Esther and Yaacov come from?

VG: Their far removal from my experience is what, to me, makes them interesting. I have also written plays about a poor white Afrikaner family and about the women in the life of Tchaikovsky. I can‘t think of anything I’ve ever tackled that is remotely a reflection of me. The characters of Esther and Ya’akov are created to serve as vehicles for the debate between an aged Holocaust survivor and a young millennial Israeli wanting to unlock what he regards as the shackles of the past and move on into a post Holocaust era that he can relate to.

S: What makes this story important?

VG: In grappling with so many diverse problems that reflect on Israel’s very survival, some issues that revert back to its very founding inevitably remain unresolved. I see this as one of them; not whether the music of Wagner may be performed or not (minuscule in the greater scheme of things), but whether some underlying issues will only be settled, not by decree but by accommodation. While this play is important to me it would be presumptuous to claim that it will be so to anyone else.

S: What do you think audiences will identify the most with when seeing your play?

VG: I’m hoping they will identify with the dilemma faced by both protagonists and take a stance with either one viewpoint or the other,  that being the essence of debate. Typically, when it comes to these sort of issues, Jews have different and very decided points of view and are generally passionate in defending them.

S: Your work has been produced around the world. Can you tell me a bit about your experience in the Israeli theatre world.

VG: This is only my second international production, the first being “Pollard’s Trial”, a play about the plight of the American spy Jonathan Pollard which enjoyed an extended run at the Cameri Theatre, Tel Aviv as well as an invited performance at the Knesset.  The portrayal of Pollard by one of Israel’s foremost actors, Rami Baruch was a tour de force and enjoyed unanimous acclaim.  Before I submit “Wagner” to Israel I want to gauge audience reaction in Sydney. Writing about Israeli topics from a ‘diasporian’ platform demands some circumspection. A production in Toronto is under consideration.

S: Growing up, what kinds of shows–plays, TV shows, movies, etc.–had the biggest impact on you? Why?

VG: I was exposed to an eclectic mix of theatre and shows from a young age. Musical theatre was a particular favourite. Throughout a four year stay in London in the late 60’s we attended as much theatre as we could afford and watched an unhealthy amount of TV drama. I think, subconsciously, I absorbed a lot of what I saw which I tried to utilize later in my own writing. However, I have been deeply inspired by the writing of the American, David Mamet who’s ability to portray natural, authentic dialogue is sheer genius.

S: What advice would you give to someone who is aspiring to become a playwright?

VG: Write about what you know and can relate to. Look for the drama inherent in a situation and let your imagination take it from there.  Keep in mind that what you see in your mind’s eye must be feasible on a stage. And most important; don’t fall in love with your words. Don’t overwrite and be prepared to cut, cut and cut. If it sounds tedious to you think of the effect on the audience.

S: What are you working on next?

VG: I’m not as yet but find the career of Advocate George Bizos who defended Nelson Mandela at the so-called ‘Rivonia Trial’ worthy of investigation. I see it as a monologue.

Victor will be attending the world premiere of You Will Not Play Wagner at the Eternity Playhouse in Darlinghurst, Sydney, in May 2017

Following the huge success of the kosher pop up restaurant which was part of our 2016 production, My Name Is Asher Lev, the restaurant is returning for our 2017 theatre season.

Two Trout Restaurant under the supervision of Community Kashrut offers you the opportunity to enjoy dinner and world-class theatre.

Located downstairs in the foyer of the Eternity Playhouse, the restaurant begins serving two hours before the show. There is an a la carte menu of starters, mains, vegetable sides, and deserts, as well as snack foods.