Shalom has its origins in the early 1960s with the establishment of the Hillel Foundation and then the building of Shalom College. In 1993 the role the College was playing had expanded to the point where it led to the creation of the overarching not-for-profit body known until 2016 as The Shalom Institute.

In 2016 the organisation rebranded as simply ‘Shalom’, because the role it plays is not just about academics and learning, it is about a connection to the Jewish community, its culture and life. 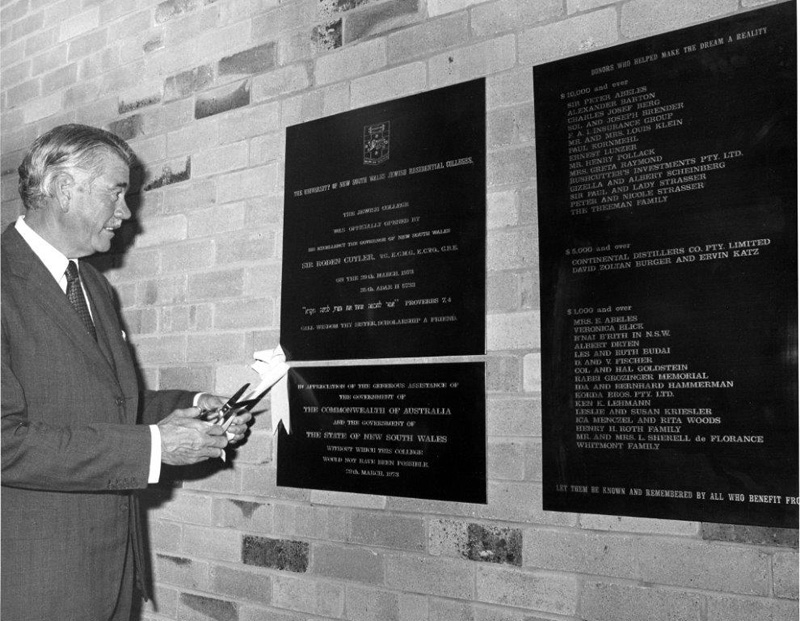 It all started with B’nai B’rith and the Hillel Foundation of NSW
In the early 1960s, B’nai B’rith established Hillel Foundations in Sydney and Melbourne to provide support and services to Jewish university students. In 1965, Alan Crown, an academic at the University of Sydney, became the part-time honorary Hillel Director of NSW.

The notion of building a Jewish residential college at the University of NSW was initiated by Jewish student leaders and then further promoted by Hillel and University of NSW academics, Professors Emery Balint and Graham de Vahl Davis.

Shalom College
On 11th April 1968, Balint, de Vahl Davis and Hillel’s Graeme Cohen discussed this proposal with UNSW’s Vice-Chancellor, Sir Philip Baxter who was supportive. Committees were formed, with de Vahl Davis as Chairman of the first Board, plans developed and funds raised – driven by the late Sir Paul Strasser, who gave the bulk of the money for the initial building. For every communal dollar raised to build the college, the federal and state governments together contributed $3.

Shalom College opened in 1973. It was the first Jewish residential college of its kind in the world.  It accommodated 80 students and 6 tutors. Its foundation Master was Zeev Amit who hailed from Israel.

In 1981, the Boards of Shalom College and the Hillel Foundation jointly appointed Zac Kaye as both College Master and Hillel Director.  Soon after, AUJS established its headquarters at the College.

In January 1989, Dr Hilton Immerman succeeded Kaye. He served for 28 years as CEO (until his retirement in December 2016) of the organisation, which, over the years, was transformed from Shalom College and Hillel into The Shalom Institute.

Young Adults and Young Families
In the early 1990’s, Immerman worked with community leaders and young adult Jewish groups to develop a strategy to address the lack of engagement – the so-called ‘black hole’ phenomenon – of this demographic. Shalom’s young adult department, Network, founded in 1997, was a response.

In 2009, with support from the JCA, Shalom developed a young adult strategic plan. Its recommendations resulted in the growth of young adult programming and a new commitment to serving young Jewish families.

PJ Library and Shalom Baby
In August, 2008 , Immerman presented a proposal to the JCA to bring PJ Library to Sydney under Shalom’s auspices. The support and endorsement of the Harold Grinspoon Foundation in the US (which runs the program) and the JCA was finally agreed and Shalom launched PJ Library in August 2011.

Shalom Baby, initiated by former Network Director, Elyse Chiert, commenced in 2011. Weekly meetings were held to connect parents and their babies from 0 – 18 months. Under its auspices, events for expectant mothers – called Shalom Preggy – were also started.

The Melton Program
In 1993, Shalom brought the two-year Melton Adult Education Program developed at the Hebrew University to Sydney.  It commenced its 1st year with a record-breaking 5 classes, comprising a total of 125 adult learners.

After 17 successful years, Shalom passed-on the Melton baton – and since 2010, the Florence Melton Adult Mini-School (FMAMS) has been run by the University of Sydney’s Centre for Continuing Education and the Department of Hebrew, Jewish and Biblical Studies. 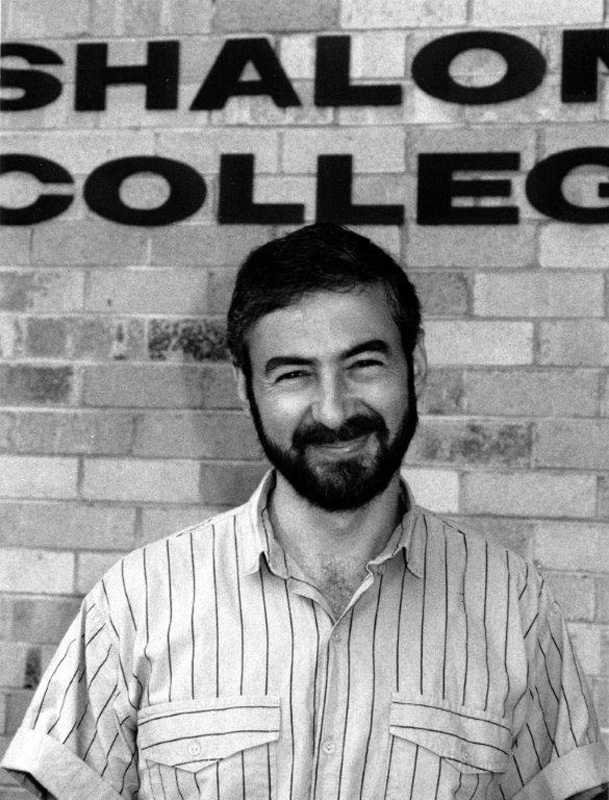 Limmud
While a Jerusalem Fellow in 1996, Immerman met with the leadership of Limmud in the UK with a view to bringing the program to Australia. In June 1999, Shalom ran the first Limmud ever outside of the UK, dubbed Limmud-Oz.  Limmud now operates in over 80 communities around the globe.

A few years later, Shalom encouraged the Melbourne Jewish community to offer Limmud-Oz in alternate years. Every second year when Limmud-Oz is offered in Melbourne, Shalom runs a one-day Yom Limmud in Sydney.

Since 2012, while continuing to be financially and professionally supported by Shalom, Limmud has been coordinated by a Limmud Board and many volunteers.

Moishe House
In February 2013, a proposal was presented to the Shalom Board to establish and run a Moishe House in Sydney. Shalom Program Director, Brandon Srot was at the forefront of implementing and overseeing MoHo, which opened in Surry Hills in March 2014. This cost-effective program supports and empowers young Jewish leaders in their 20s as they create meaningful home-based programs for their peers.

Other successful programs
Shalom has been running a great diversity of innovative programs which are becoming part of our more recent history. Examples include the Professional Women’s Forum, MOTH, annual theatre productions, LaunchPad, the Graf Oration, etc.

The Shalom Gamarada Indigenous Scholarship Program
This residential scholarship program at Shalom College was founded in 2005 by Ilona Lee AM and Professor Lisa Jackson Pulver AM. It is making a real contribution to closing the gap between Indigenous and non-Indigenous Australians through higher education by increasing the number of Indigenous professionals.

As of July 2016, in its 11 year history, a total of 77 Indigenous students have been supported and 25 have graduated, including 16 Aboriginal doctors.

Patron, Dame Marie Bashir said, “This program is a strong and eloquent contribution to our journey of reconciliation.”

Changes in structure and modus operandi
In 2014, Shalom redeveloped its strategic plan. In 2015, led by Board Vice President and marketing expert, Jason Eisner, staff and board members reassessed Shalom’s marketing and branding strategies. It was resolved to cease operating under various departments (eg, Hillel, Network, Encounters), which were all branded differently, and to restructure and transform Shalom into one organisation with consistent branding.

As part of the process, all our activities were re-evaluated with a view to focusing on programs which were most consistent with our mission, had the greatest impact and were most cost-effective. In the process, at the start of 2016, we ceased operating Hillel (as AUJS had grown professionally and was effectively managing functions previously performed by Hillel) and moved from a departmentally-based model to a programmatic one. Shalom’s new brand and website was launched in September 2016.

The Capital Appeal, Eric Caspary and a reunion with B’nai B’rith
The Shalom Institute was granted the right by the JCA to hold a capital appeal in 2001. It was chaired by John Landerer CBE AM and run by board member Penny Hurst OAM and CEO Dr Hilton Immerman OAM.

Thanks to many supporters and especially the great generosity of the major benefactor, Dr Eric Caspary, the financial target required to build the Learning Centre and increase by 50% the accommodation for College residents was exceeded.  The new building opened in July 2003 and, with the surplus capital funds, the original building and residents’ rooms were renovated in 2004/05.

With increased attendance at events, Shalom outgrew the space available in the Caspary Centre. Since selling its East Sydney building in 2013, B’nai B’rith Centre was in search of a new home which it found in Shalom’s Learning Centre.

Shalom President, Jonathan Leib explained that this will ensure that the premises at Shalom will be utilised to their full capacity, which will provide funds for the continued growth of Shalom’s cutting edge programs and will enable Shalom and B’nai B’rith to share resources and work more closely together. From establishing Hillel, a predecessor of Shalom, in the 1960s, B’nai B’rith will, in a sense, be coming home. 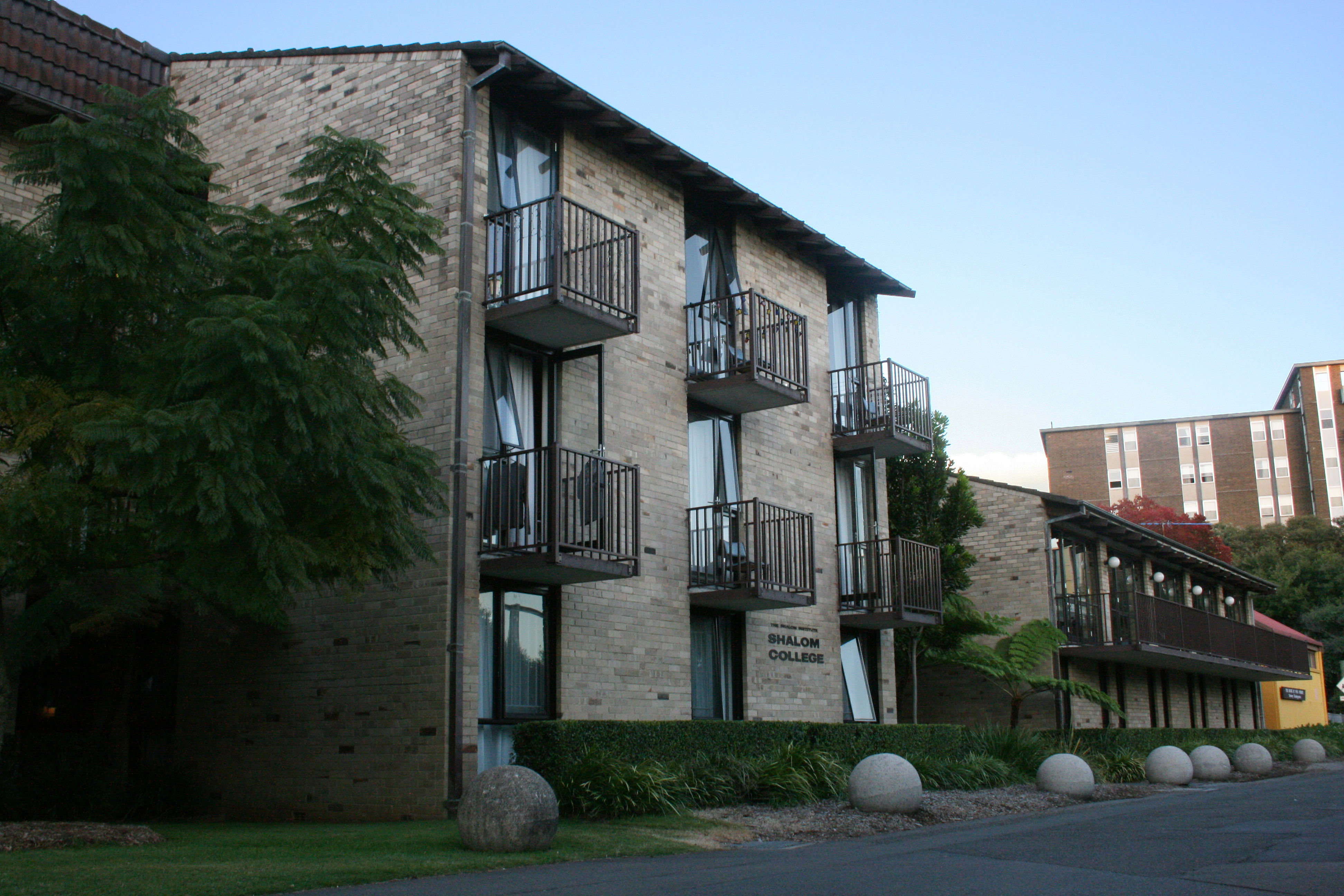 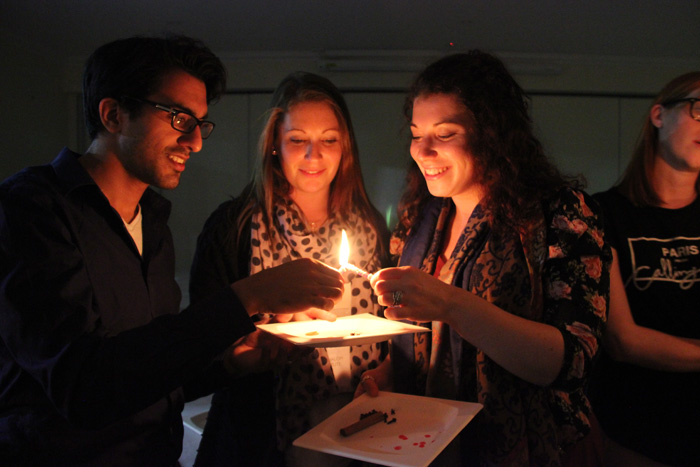 Past Presidents, CEOs and Life Members

1993 – Present
See below under The Shalom Institute

Keep up to date with our latest news and events