Join us to hear author Gideon Haigh talk with John Faulkner about Haigh’s book ‘The Brilliant Boy: Doc Evatt and the Great Australian Dissent.’ In Gideon Haigh’s superb biography, he takes us into the brilliant mind of Herbert Vere Evatt, the legacy of Evatt’s dissenting legal opinions and his pivotal role in the foundation of the state of Israel. 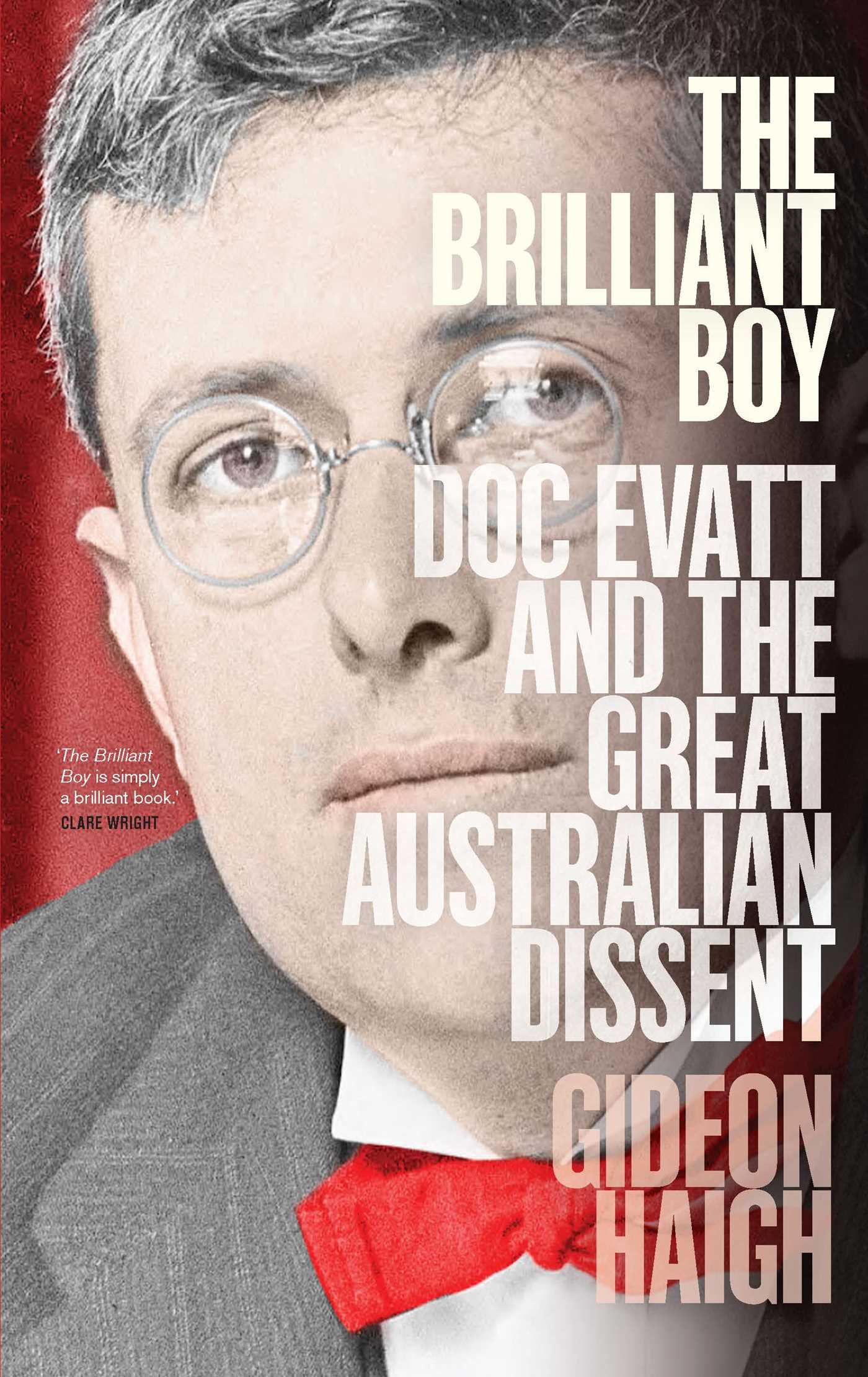 In a quiet Sydney street in 1937, a seven year-old Jewish migrant boy drowned in a ditch that had filled with rain after being left unfenced by council workers. How the law should deal with the trauma of the family’s loss was one of the most complex and controversial cases to reach Australia’s High Court, where it seized the imagination of its youngest and cleverest member. The case, and Evatt’s dissenting judgement, became a watershed in Australian legal history. His opinion encapsulated ideas of post-traumatic stress and the long effect of physical and mental trauma on people.

These days, ‘Doc’ Evatt is remembered mainly as the hapless and divisive opposition leader during the long ascendancy of his great rival Sir Robert Menzies. Yet long before we spoke of ‘public intellectuals’, Evatt was one: a dashing advocate, an inspired jurist, an outspoken opinion maker, one of our first popular historians and the nation’s foremost champion of modern art. Through Evatt’s innovative and empathic decision in Chester v the Council of Waverley Municipality, which argued for the law to acknowledge inner suffering as it did physical injury, Gideon Haigh rediscovers the most brilliant Australian of his day, a patriot with a vision of his country charting its own path and being its own example – the same attitude he brought to being the only Australian president of the UN General Assembly, and instrumental in the foundation of Israel.

A feat of remarkable historical perception, deep research and masterful storytelling, The Brilliant Boy confirms Gideon Haigh as one of our finest writers of non-fiction. It shows Australia in a rare light, as a genuinely clever country prepared to contest big ideas and face the future confidently.

Gideon Haigh has been a journalist for almost four decades, published more than 40 books and contributed to more than 100 newspapers and magazines. His books include The Cricket Wars, The Summer Game and On Warne (which won numerous prizes) on cricket, and works on BHP, James Hardie and how abortion became legal in Australia. His book ‘The Office: A Hardworking History’ won the NSW Premier’s Literary Award for Non-Fiction. He has appeared widely on radio and TV. He lives in Melbourne.

John Faulkner was born in Leeton, NSW in 1954. He was educated in the public school system and Macquarie University. After graduating in the 1970s he worked as a teacher of severely disabled children. In 1980 he became the Assistant General Secretary of the New South Wales Branch of the Australian Labor Party. He became a Senator in 1989 and served continuously in the Senate representing the State of NSW until his retirement in 2015 – by which time he was Father of the Australian Senate.

He was a Minister, then Cabinet Minister, in the Keating Government serving as Minister for Veterans Affairs and Minister for Defence Science and Personnel (1993 to 1994) and then Minister for the Environment, Sport and Territories (1994 to 1996). After the defeat of the Keating Government he served as Leader of the Opposition in the Senate (1996-2004). John Faulkner was elected National President of the ALP in 2006 and served in that position until the election of the Rudd Government.
He served as a Cabinet Minister and Vice-President of the Executive Council in the Rudd & Gillard Governments – as Cabinet Secretary and Special Minister of State (2007 to 2009) and then as Minister for Defence (2009 to 2010) until his retirement from the ministry. He retired from parliament in early 2015.

John Faulkner remains active in many community organisations and charities including as Chair of the Bondi to Manly Walk Steering Committee and the Whitlam Institute within Western Sydney University.

Gideon Haigh will be in conversation with John Faulkner

WHEN: Wednesday August 4th at 8pm (AEST)
WHERE: Via Zoom

This event is free but you’re welcome to make a donation to Sydney Jewish Writers Festival.

Praise for The Brilliant Boy

‘Here is a master craftsman delivering one of his most finely honed works. Meticulous in its research, humane in its storytelling, The Brilliant Boy is Gideon Haigh at his lush, luminous best. Haigh shines a light on person, place and era with the sheer force of his intellect and the generosity of his words. The Brilliant Boy is simply a brilliant book.’
– Clare Wright, Stella-Prize winning author of The Forgotten Rebels of Eureka

‘Gideon Haigh is one of Australia’s most versatile and skilled historians.’
– Geoffrey Blainey

‘This new biography of HV Evatt lifts the lid on his early life as a brilliant barrister and creative Justice of the High Court of Australia. It reveals the wellsprings that gave birth to his humanitarian and internationalist values that later helped in the creation of the United Nations. It helps to explain Evatt’s valiant defence of liberty in fighting off the attempt to ban the communists in Australia. We need to constantly renew our acquaintance with such values. This book reminds us of Evatt’s flawed genius but deep motivations, lest we ever forget.’
– The Hon Michael Kirby AC CMG

“This is a very impressive book, meticulously researched, without strain or longueur.. Haigh’s thoroughness and own humanity allows a man – in all his prodigious ability and manifest frailty – to emerge out of the fog of political propaganda and public amnesia, and become, again, a goad to Australian complacency and deficiency of human empathy.”
– Morag Fraser, in her review for Sydney Morning Herald

Gideon’s book ‘The Brilliant Boy’ is available from Gertrude and Alice, the official SJWF book seller. You can order online here https://www.gertrudeandalice.com.au/product-category/sjwf/ or by calling 02 9130 5155