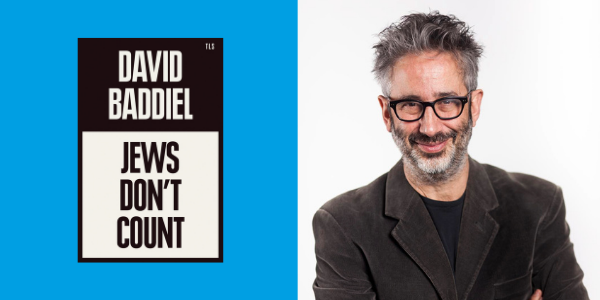 Jews Don’t Count is a book for people who consider themselves on the right side of history. People fighting the good fight against homophobia, disablism, transphobia and, particularly, racism. People, possibly, like you.

It is the comedian and writer David Baddiel’s contention that one type of racism has been left out of this fight. In his unique combination of close reasoning, polemic, personal experience and jokes, Baddiel argues that those who think of themselves as on the right side of history have often ignored the history of anti-Semitism. He outlines why and how, in a time of intensely heightened awareness of minorities, Jews don’t count as a real minority: and why they should.

‘a must read and if you think YOU don’t need to read it, that’s just the clue to know you do.’
SARAH SILVERMAN

David Baddiel is a comedian, author, screenwriter and television presenter. He has made several acclaimed documentaries, and more recently created and presented Confronting Holocaust Denial and Social Media, Anger and Us on BBC2.

David will be in conversation with John Safran.

John Safran is a writer and filmmaker who always gets in too deep for his own good. His debut book, Murder in Mississippi, won the Ned Kelly Award for best true crime. His follow up, Depends What You Mean by Extremist, found him lost among radicals and was shortlisted for the Australian Book Industry Awards. His wild and hilarious documentaries, such as ‘John Safran vs God’ and ‘Jedis & Juggalos’, have received accolades from the Australian Film Institute and Rose d’Or Festival. His latest book is Puff Piece: How Philip Morris set vaping alight (and burned down the English language).

Please note that this event will NOT be recorded.